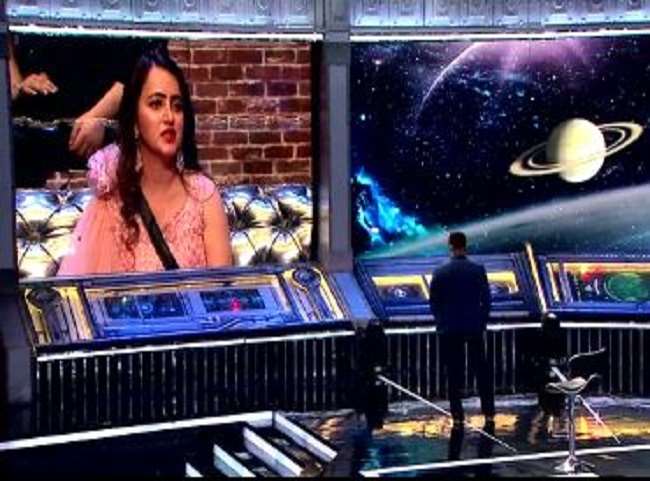 Bigg Boss 14 written updates 7 Feb: Season 14 finale is stepping closer and  Abhinav Shukla, Ali Goni, Rubina Dilac, Rakhi Sawant, Rahul Vaidya, Devolina Bhattacharjee and Nikki Tamboli are strengthening their game to reach the finale. Arshi Khan who was in headlines for her entertainment as well as instigating other contestants got evicted in Weekend Ka Vaar due to fewer votes. While Salman Khan is hosting Bigg Boss for the 11th time, First time in the season he got furious on the contestants and got disappointed on their unexpected behaviour at the BB House.

While Salman Khan admonished the housemates for their behaviour, he also slammed them for quoting every situation as ‘Content’. He especially questioned Rubina for not valuing others emotions and mocking them saying they are doing for the content. He also probed everyone to question the makers and creative team and disrespect the public from areas like Lokhandwala, Nalasupari etc.

Rubina Dilaik also revealed her old past when she used to struggle with anger issues and has suicidal tendencies. She shared that her old behaviour which she did overcome by yoga and other therapies got triggered in the show due to all the environment.

Salman Khan also asked the point of view of the supporters of housemates who will be entering the house this week. Jasmin Bhasin, Jyotika Dilaik and others shared their insights on what the contestants are doing and what their effect. Jyotika had an emotional outburst and explains that her sister Rubina Dilaik is not that bad as a person and she will try to calm her down after entering the house.

While the weekend got a little calm when Jasmin Danced with Salman khan on ‘Chunari Chunari’, Arshi Khan bid adieu to the show by giving her last Sajda to the house. Salman also announced that the upcoming week will be special and there will be no nomination task as everyone will be nominated for the week.

After the Weekend Ka Vaar, housemates felt guilty for their behaviour and talked about how things got intense and dirty around. Rakhi also shares with Devoleena that she will try to talk to Rubina and Abhinav again and will give the last chance to mend things. Abhinav also talks with Rubina about her behaviour while quoting Jasmin’s incident with Rubina gets furious and they end up disappointed with each other.

What all other surprises will be there in the upcoming week? What twist will the house witness when the supporters will enter the house for the family week? Who will get evicted and who will have a stronghold on in the race to the finale? There are so many questions and only answers. Watch the episodes and stay tuned with us for further updates.