BAFTA 2021: Priyanka Chopra Jonas keeping up her A-Game at the Red Carpet with Hubby Nick Jonas 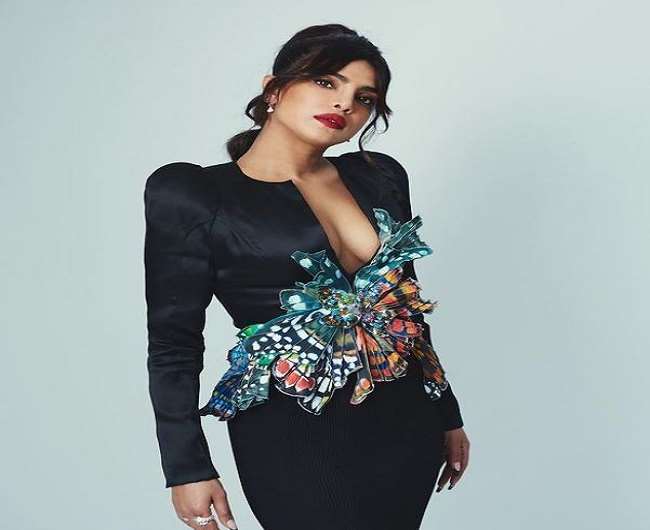 Film actress Priyanka Chopra Jonas recently appeared on the red carpet of the BAFTA Awards 2021 with her hubby Nick Jonas. She was also accompanied by popular artists and singers like Hugh Grant, Tom Hiddleston, Asim Chaudhry. While Priyanka always keeps up her A-game in styling for the red carpet event, her recent pictures with Nick Jons during the red carpet and Award night of BAFTA 2021 are causing sensations all over the internet.

Priyanka Chopra Jonas has shared her look from the Red Carpets of BAFTA 2021 held at London’s Royal Albert Hall. She is looking stunning in her embellished jacket with open front and has paired it with silky white trousers from the studios of Pertegaz. She has paired her outfit with Black pumps by Christian Louboutin. She has kept her jewellery minimal with a turquoise pendant, small pearl earring and rings by Bulgari. Meanwhile, her handsome hubby stole all the hearts in his black tuxedo by Giorgio Armani. Definitely, the couple is giving some major style goals.

❤️ is in the air at the #EEBAFTAs as @priyankachopra and @NickJonas arrive! Priyanka will be presenting an award later tonight. pic.twitter.com/IjZZEszaA4

Priyanka has also shared pictures of her other look from the award nights where she is adoring black skirt and jacket by Designer  Ronald van der Kemp and has assembled her silhouetted with a big butterfly motif. She has again kept her outfit minimal with the jewellery by Bulgari and her plunging neckline is just giving her outfit that perfect hotshot look.

Priyanka Chopra has been nominated for 2 categories at the awards. One for her film 'The White Tiger'. While Adarsh Gaurav is also a contender for the Best Actor category in the film. Rajkummar Rao also played an important role in this film. Director Rahim Bahrani is nominated in the Screenplay category.

Recently Priyanka Chopra announced the nominee for the Oscar 2021 with her husband Nick Jonas. This time the BAFTA 2021 has been held virtually. A total of 17 awards will be announced. While the film director Ang Lee will be awarded the Fellowship Award.