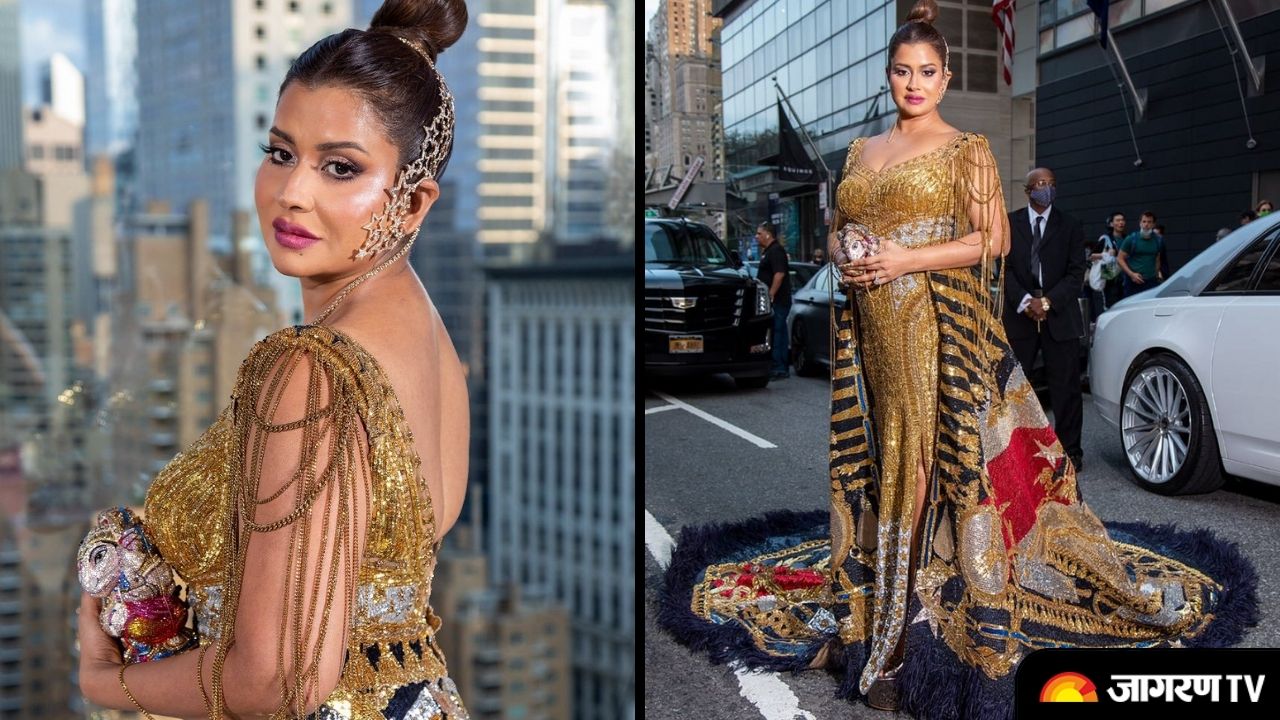 Sudha Reddy Met gala 2021: Philanthropist Sudha Reddy becomes the only Indian to walk the red carpet of Met Gala 2021. Sudha wore the design of Falguni and Shane Peacock and brought the beauty of Indian craftsmanship to International events. Following this year’s theme ‘In America: A Lexicon of Fashion’ Sudha’s outfit was inspired by the American Flag.

In an interview with Indian Express Indian designer, Falguni and Shane Peacock unfurled the idea behind Sudha Rheddy’s design. The designer says, “gold body-hugging gown with au courant cuts that will entail a shimmering four-meter flared trail which will imbibe a medley of hues borrowed from the American flag and varnished with refined 3D adornments of Swarovski crystals, sequins and bugle beads.”

“More than 250 hours” to create Sudha’s outfit. “We have focussed on a lot of detailing and we employed the services of our skilled atelier artisans in order to ensure the outfit does full justice to Sudha’s eclectic persona. We have created a novel edgy military-inspired look that blends well with the overall theme of the Met Gala,” the designer further added.

According to the press conference, Sudha Reddy made her Met Gala debut in 2021 and became the first Hyderabad-based, non-film personality to attend this international event.

Who is Sudha Reddy?

Sudha Reddy is a Hyderabad-based Philanthropist who is also a businesswoman, entrepreneur, founder, philanthropist, homemaker. Reddy is also known for her charitable work and is in contact with some prominent celebrities regarding her work for the same. Due to her work, she is also a prominent name internationally and is not new to such global events.

Reddy is also a propagator of breast cancer awareness. She has also collaborated with Elizabeth Hurley in the past for a similar cause. Sudha has also worked with  Eva Longoria for an initiative on children's health.

Reddy is also a savant of art and fashion. She loves shopping from both streets of Hyderabad to high-end luxury designers. In an interview, she even revealed that she has a diamond on her left incisors which sparkles when she smiles.