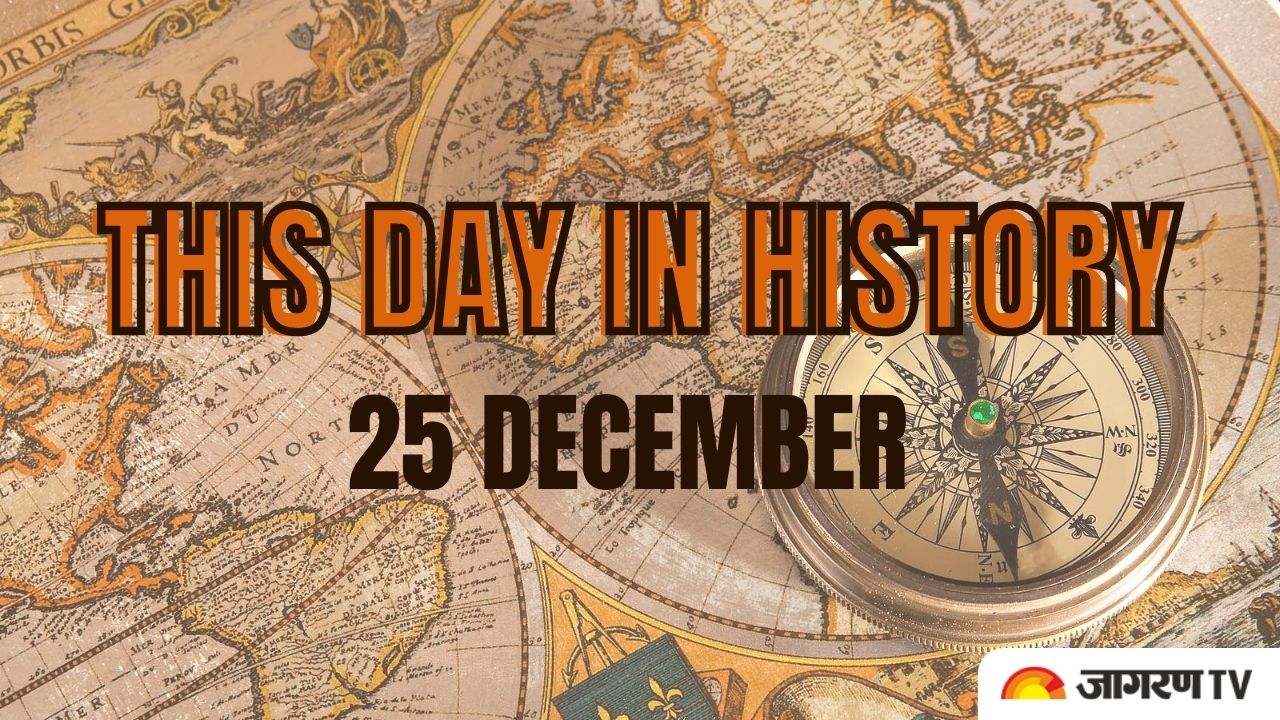 This Day in History: According to the Gregorian calendar, December 25 is the 359th day of the year and 360th in a leap year. From today only 7 days remain to celebrate the New Year 2022.

On this day let’s see some important events and anniversaries. We have compiled a list of some monumental events that happened all around the world on 25 December as well as birthdays of famous people.


Christmas is an annual festival celebrated on the birth anniversary of Jesus Christ. Many religious and cultural events happen all around the world. It marks the holiday season in many countries.

Dashing off home for a few days. Merry Christmas, one and all! 🎄 pic.twitter.com/9vamQW8Nmc

Former Indian Prime Minister, Atal Bihari Vajpayee was born on this day. He had been appointed as Prime Minister of India 3 times. He also launched Rs. 60,000 crores Gram Sadak Yojana under the Village Roads Scheme.

I bow in reverence to Atal ji on his jayanti, also celebrated as Good Governance Day. pic.twitter.com/gODTBHMmiT

Mikhail Gorbachev formally resigns as President of the USSR in a televised speech. This marked the dissolving of the Soviet Union.

Soviet family watching the announcement of the USSR President Mikhail Gorbachev on his resignation. Photo by Sergei Karpukhin, December 25, 1991 pic.twitter.com/79MarZc1qn

Charlie Chaplin was a renowned comic actor who worked in silent movies. Chaplin used methods like mime, slapstick and other visual comedy routines, and continued well into the era of the talkies.

❄️ Warm wishes for the holidays and the New Year to all from the Chaplin Office ❄️ pic.twitter.com/U5QKJsFTdL

William I was crowned king of England, after this coronation, Norman Conquest was formally completed.

In 1771, Marathas under Mahadaji Shinde captured Delhi and made Shah Alam II return to Delhi after 18 years.

As the nation celebrates Good Governance Day in the backdrop of the #AzadiKaAmritMahotsav, let us introspect & pledge to act in the spirit of “Sabka Saath, Sabka Vikas, Sabka Vishwas, Sabka Prayas” for building a NewIndia, Hon Minister Sh @arjunrammeghwal
https://t.co/rF4BTqsAyX

In 1964,  3000 people were killed in Tamil Nadu. This tragic incident happened after a cyclone hit Tamil Nadu in the North Indian Ocean region.

Born in 1876,  Jinnah was the politician and the founder of Pakistan. Jinnah served as the leader of the All-India Muslim League from 1913 until the partition of India and Pakistan on 14 August 1947.

In 1900,  In Kentucky, a smallpox epidemic was raging with hundreds of people being infected by it. It was a very fatal epidemic. The mortality rate was around 20% and health authorities demanded vaccination for every person of the state.


Above are the 10 most important events that happened in the history of India and the whole world. It includes major birthdays, death anniversaries, fun facts and important historical events that occurred in India as well as globally.