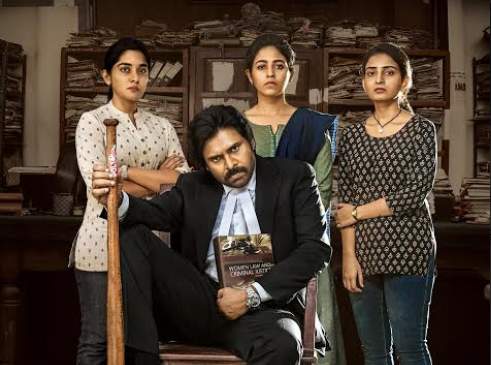 Vakeel Sahab Review: The Telugu Remake of Amitabh Bachchan starrer ‘Pink’ titles as Vakeel Sahab has hit the theatres on April 9. The actor Pawan Kalyan has come back on big screens after a big break of three years, as he entered politics. The film was a hit in its Bollywood version, and people lauded the roles played by Amitabh Bachchan, Tapasee Pannu and others, Telugu remake ‘Vakeel Sahab’ has high expectation as makers have quoted before that Vakeel Sahab is not just a remake but the best version of the film.

Directed by Venu Sriram, the film Vakeel Sahab has actor Pawan Kalyan in the role of Lawyer along with  Nivetha Thomas, Anjali, Ananya Nagalla, Prakash Raj, Shruti Haasan and Others in pivotal roles. The film is produced by Dil Raju and Boney Kapoor under the banner of Sri Venkateswara Creations. While the story is based on the Bollywood film ‘Pink’ by Aniruddha Roy Chowdhury and Shoojit Sircar the Music of the film ‘Vakeel Sahab’ is given by  S Thaman.

Following the story of the movie ‘Pink’, the plot of the film ‘Vakeel Sahab’ revolves around three girls from middle class working background named Pallavi (Nivetha Thomas), Zareena (Anjali) and, Divya Naik (Ananya Nagalla) who are roommates and best friends. The three girls get knotted into a legal case one of them faces molestation at a party by a young man Vamshi (Vamshi Krishna) and his friends from a powerful background.

Though the girls managed to escape from the party and Pallavi hit Vamshi with a glass bottle in self-protection., which caused severe injury to him. Vamshi and his friends later file a legal case against the girls. Things escalate and the suspended lawyer, Vakeel Saab Konidela Satyadev (Pawan Kalyan) takes the case for girls as a defence. The story then unfurls the story about Vakeel Sahab, the truth behind the night and his case to seek justice for girls.

The Bollywood version of the film which starred Amitabh Bachchan highlighted the changes which are needed in society regarding the patriarchal and old mindset regarding women. While the film itself had a huge expectation, people are also excited to see Pawan Kalyan on screen after three years.

While Pawan Kalyan is known for his commercial entertaining roles, his performance in the film will definitionally a challenge for a movie like Pink. The script of the film Vakeel Sahab is taken from the film Pink which required no changes although there has been some editing of the scenes as per the presence of Pawan Kalyan and his popularity. Even the plot, including some dialogues, expressions and gestures have not been changed by the director Venu Sriram.

The story of the film also lacked in emphasising the characters of the three girls who faced molestation and later caught up in the legal case. Director Venu also kinda rushed the story which restricted the audience to connect with the characters of the girls and emotional points faded away.

While the film manages to grab the audience with the comeback of actor Pawan Kalyan, the film does lack major strong elements and comparative to the ‘Pink’ it has also lacked to bring forward the essence of the story. The film is enjoying a good opening yet the box office collection in these pandemic times is difficult to speculate.

No words can't expect a better comeback movie for #PawanKalyan

Will keep you posted on the same pic.twitter.com/fCKJvaQN4u