Vikram, Prithviraj and Major faces the biggest clash; check who is leading at the box office 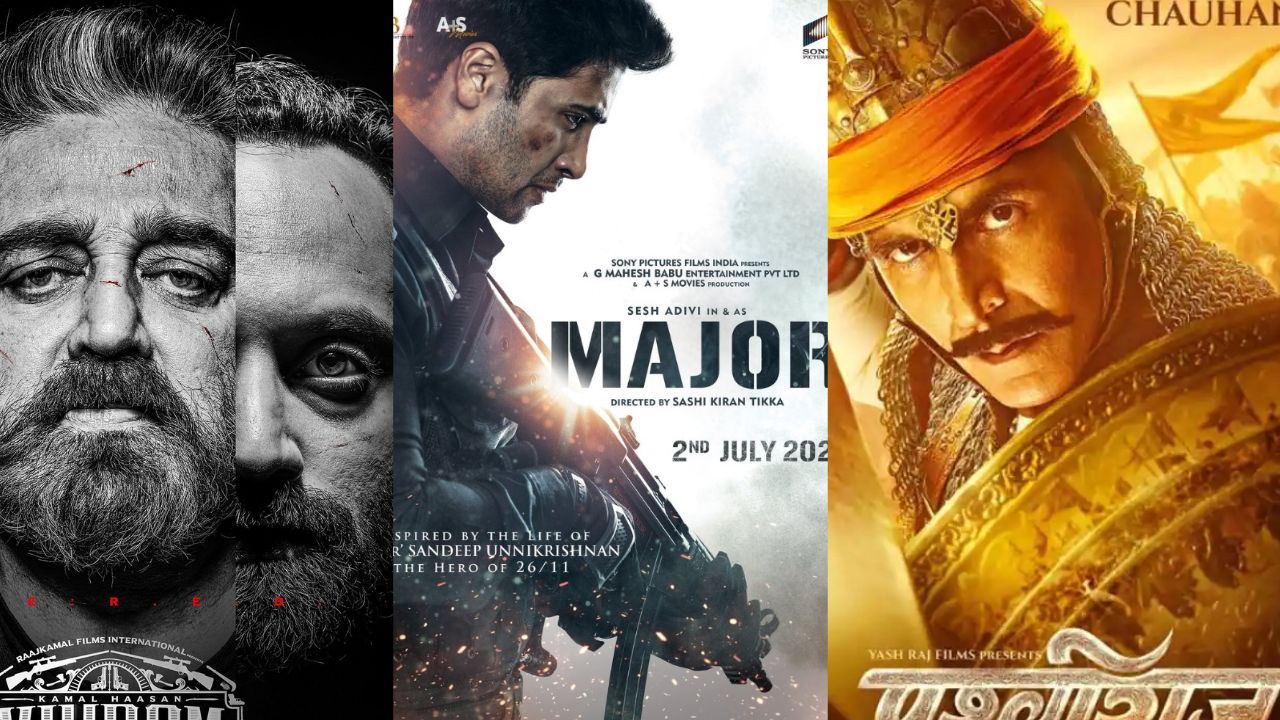 Box office of Indian cinema saw some major clashes on Friday with the release of Pan India films such as Akshay Kumar and Manushi Chillar’s hysterical drama Prithviraj, Adivi sesh’s ‘Major’ based on the biopic of Major Sandeep UnniKrishnan the war hero of 26/11 attack and then finally Kamal Haasan’s, Vijay Sethupathi and Fahadh Faasil marks the comeback of the superstar on the silver screen after a wait. As per the reports surfaced The three films grossed roughly Rs. 85 crore worldwide, with Vikram dominating with over 400 percent.

After a slow start at the box office, the historical war drama Samrat Prithviraj, starring Akshay Kumar in the title role, saw an uptick in its box office collections on the second day of its rollout, collecting around Rs 12.75 crore on Saturday,  bringing the total collections to Rs 23.45 crore. The film on  Friday (release day) grossed almost 10.70 crore.  As a result, the historical accuracy of the picture is being held .

On June 3rd, the film 'Major,' starring Adivi Sesh, Saiee Manjrekar, and Sobhita Dhulipala, was released. The film depicts the tragic night of November 28th, when NSG commando Major Sandeep Unnikrishnan died bravely defending his country. Major is a biopic of Mumbai police officer Major Sandeep Unnikrishnan, who was martyred in the 2008 Mumbai terror attacks. The Telugu film also got a pan India release. Early estimates stated that despite having a good start the film slowed down a bit on it’s day  2. The Adivi Sesh-starrer got off to a great start in India, making 7 crore on its first day.  the biographical drama grossed approximately Rs 5.50 crore in India net on day two, bringing the film's total box office revenue to Rs 12.50 crore.

On Saturday, Vikram had a spectacular hold, grossing a whopping Rs. 31 crores plus approx. on its second day. The film's two-day total at the National box office is over Rs. 65 crores, indicating that it will have a phenomenal opening weekend.  The film, directed by Lokesh Kanagaraj, is being appreciated not just by Indians, but also by spectators all over the world. Vikram has made more than Samrat Prithviraj and Major on the second day of their releases in the United States of America.
Kaun Banega crorepati 2022 start date, time, where & how to watch, new rules, prize money & more
यह भी पढ़ें