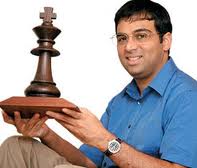 Today, on the occasion of the birthday of chess grandmaster Viswanathan Anand, let’s talk about his education, family, career, achievements as a great player. We will also see some fun facts about him.

Viswanathan Anand was born on  11 December 1969. He is an Indian chess grandmaster and a former world chess champion.in 1988, he became the first grandmaster from India and is one of the few players to have surpassed an Elo rating of 2800, he first achieved this in 2006. He became an icon of many children and they were motivated and driven towards the game of chess. Following his footsteps, many young children have represented India in the game of chess.

He was born on 11 December 1969 in Chennai, Tamil Nadu. His father, Krishnamurthy Viswanathan was a retired general manager of Southern Railways, and his mother, Sushila, was a housewife, chess aficionado, and socialite.

He married Aruna in 1996. They have a son who was born on 9 April 2011. His name is Akhil Anand Anand is a Hindu and has stated he enjoys the tranquility and joy of temples. He has credited his daily prayers to help him achieve a "heightened state of mind" that makes his focus better while playing chess.

Anand was educated at Don Bosco Matriculation Higher Secondary School in  Egmore, Chennai(Tamil Nadu), and has a Bachelor of Commerce degree from Loyola College, Chennai. He started learning chess from age 6 from his mother but learned the tactics of the game in Manila where he lived with his parents from 1978 through the '80s while his father worked as a consultant by the Philippine National Railways.

Career and Achievements of Viswanathan Anand

Net Worth of Viswanathan Anand

Viswanathan Anand has reached the pinnacle of the world ranking of 1, it is not surprising that the Indian chess champion has accumulated a huge amount of wealth over the years through his talent. As per Celebrity Net Worth, Anand has a net worth of $3 million USD. He became the global brand ambassador of NIIT, a global IT services company.