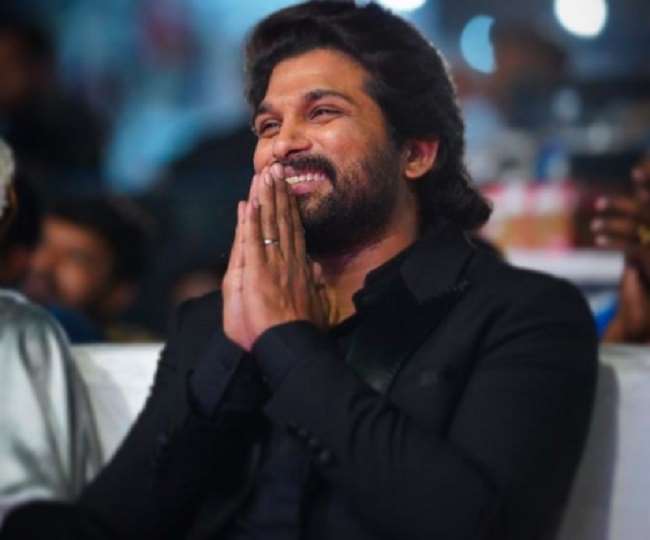 Famous South Cinema actor Allu Arjun is celebrating his 38th Birthday on April 8. Telugu superstar Allu Arjun has won the hearts of the audience with his brilliant performances in many films. Other than his amazing acting, he is also known for his unique dancing style in films. Celebrating his birthday, the makers of Allu Arjun’s upcoming film Puspa Raj hosted a grand event on Wednesday and launched the much-awaited teaser of his film.

The makers of the film Puspa hosted a grand event to launch the first teaser of the most awaited film. Along with the launch, they also celebrated the birthday of Allu Arjun while surprising him with a surprise 20 kg birthday cake which had all his 20 films on it.

While the teaser is going viral on the internet and fans are excited for the film and trailer. The event was made more special with Allu Arjun’s birthday celebration while the actor was looking all stylish and charming wearing a grey sweatshirt and black joggers. And on top of it was his smile which took all the breaths away.

At the event, Arjun also thanked everyone for the love and support and specially thanked the audience from around the country for loving his films. Showing his gratitude he said "I would like to thank the audience from all the other languages Tamil, Malayalam, Kannada and from other countries for watching Telugu films. You all make us feel proud, today, we have become a big market today, not because of us but you all have made it. We need your blessings and support. thank you so much."

(Watch the teaser below)

Allu Arjun film ‘Pushpa’ Teaser was launched in a grand celebration at Hyderabad in JRC convention centre. Arjun also celebrated his birthday along with the teaser release with director Sukumar and the team. His brother, Allu Sirish was also present at the event and the entire team had a blast.