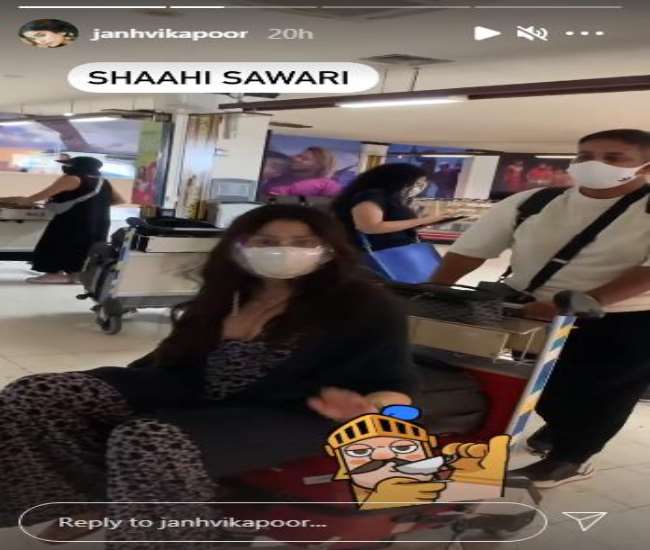 Bollywood Actress Janhvi Kapoor is very active on social media. While this B’town beauty enjoys a following of more than 10 M followers on Instagram, her posts often go viral on social media. Recently, she was papped by the media at Mumbai airport and her fun video while riding a luggage trolley is going viral on the internet.

In the recent video uploaded by Bollywood’s famous celebrity photographer Viral Bhayani, Janhvi was spotted at Mumbai airport while having fun sitting on a trolley like a child. The actress was spotted wearing a comfy black oversized coat and printed dress and a mask for protection. The video is liked by her fans and is going viral on social media. People are loving her fun personality.

Janhvi catch up with the Maldives Vacation trend

The actress was heading for her vacation in the Maldives. She also posted a picture on her Instagram and wrote, “Last to get on the Maldives bandwagon but I fully get the hype.”

The actress is looking all hot in her yellow dress while enjoying the ocean vibes. Let us tell you that she is not the first one who went to the Maldives for a vacation. Many celebrities in the past months were spotted taking a break from their work lives and chilling in the Maldives.

Talking about Janhvi’s work front, she will soon be seen in the film 'Good Luck Jerry'. Apart from this, she will be seen in 'Dostana 2' alongside actor Karthik Aryan. The film is a sequel to the 2008 film Dostana. Abhishek Bachchan, John Abraham, Priyanka Chopra played the lead roles in the previous film. At the same time, she was last seen in the horror-comedy film Roohi. In this film, she played the character of a girl who is possessed by a soul. She was cast alongside Bollywood actor Rajkumar Rao, Varun Sharma.