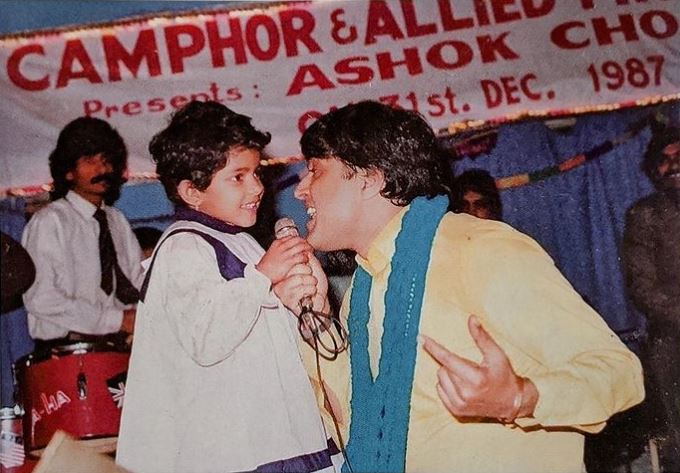 Remembering her father on his 8th death anniversary, Bollywood actress Priyanka Chopra dived into the memory lane and shared a special post from her childhood. From the album of her childhood, Priyanka reminiscence a memory with her father when both of them used to perform together in Army parties.

Sharing the photo with her father Priyanka wrote a note in the picture and penned down her nostalgic memory with daddy Ashok Chopra. She wrote, “From my earliest years, my dad and I had an understanding. Whenever he was performing at the army club he would look me in the eye during the first song. The New Year’s Eve I was five he forgot, so I started to leave in a huff. Dad jumped off the stage and pulled me up onto it with him, coaxing me into a duet-a a nursery rhyme and winning my forgiveness.”

In the picture, Priyanka is seen as a small kid with curly hair singing a duet with her beloved daddy on New Year’s Eve Dec 1987. Sharing the picture on Instagram Priyanka wrote in the caption, “It never gets easier… love you dad♥️”

Priyanka Chopra’s  mother, Madhu Chopra also shared a special post for her husband on Twitter along with his picture and wrote, “Forever and always loved!”

Let us tell you that PC’s father was a physician and was serving in the Indian Army. He left the world on June 10, 2013, after losing his long battle with cancer at the age of 62.

Priyanka also etched a tattoo on her wrist dedicated to her father. She inked, “‘Daddy’s lil girl …’ in the loving memory of her daddy Ashok Chopra.